Human-powered aircraft study group "NIEWS" (Nagoya Institute of Technology AEro Wing's) participated in the 37th Japan International Birdman Rally on 26-27 July 2014 at Biwa lakeside in Shiga-pref.
The Japan International Birdman Rally organized by Yomiuri Telecasting Corporation started in 1977 with the purpose of producing a TV program.
In 1977, 82.44m was recorded as the longest flight distance of the 1st rally and the best score in its history was recorded 36,000m in 2008.
In 2014, NIEWS couldn't get a chance to fly because the rally was unfortunately cancelled due to the weather condition.
Wishing their success in the 2015 flights!!
【YouTube】 NIEWS test flight 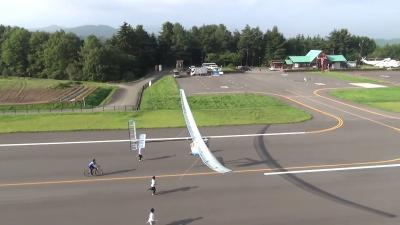 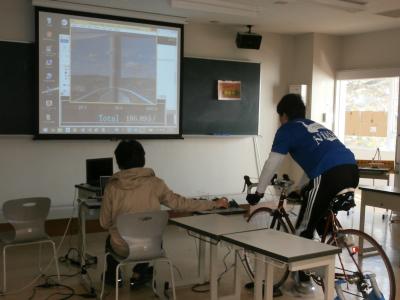 At NITech Festival in November, 2014, visitors enjoyed the simulation of human powered flights.

TIPS for human-powered aircraft:
A human-powered aircraft (HPA) is an aircraft powered by direct human energy and the force of gravity.
The great artist and engineer Leonardo Da Vince is often known as the first to propose a flying machine, a giant bat-shaped craft in 1490. However the aircraft was never built.
The first truly successful HPA came in 1977 when Gossamer Condor (USA) flew a one-mile figure-of-eight course in 7.5 minute.
【YouTube】 The flight of Gossamer Condor