Assistant Professor Zineb Mouline ( Yuji Iwamoto Laboratory ) participated in COP21.
The below is her report titled " COP21, from a Moroccan Perspective..".

★Report★
On 23 November, more than 150 heads of state gathered at Le Bourget for the opening of the 21st session of the Conference of the Parties to the UN Framework Convention on Climate Change, as the conference is officially called. Following a minute of silence for the victims of last months' terrorist attacks in Paris, UN Secretary General Ban Ki-Moon urged negotiators to strike an ambitious deal, saying that "we cannot afford indecision, half measures or gradual approaches. The goal must be transformation." French Foreign Minister Laurent Fabius, who is presiding over the talks, urged participants to work together to "make the Paris conference the success that the world awaits".

I was personally invited by the Moroccan ministry of environment to take part to the COP21 as an accredited scientist in the field of CO2, which was an honor for me! The events were organized in 3 parts: The blue zone at Le Bourget, where accreditation is required to enter, the green zone, open to anyone, and other off-site events in central Paris. 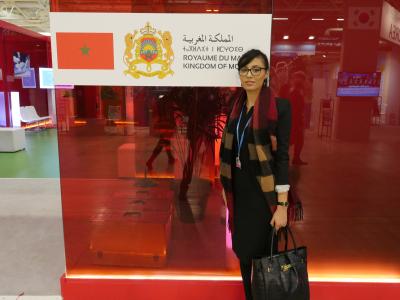 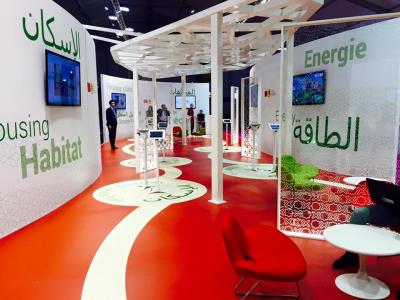 After tremendous security checks, I was eventually able to join the beautiful red Moroccan Pavillion, where I had the honor to shake the hand of His Majesty King Mohamed VI during his short visit!
I was also very glad to meet distinguished members of the Moroccan government, as well as scientific delegates and laboratory directors from prestigious research institutes in energy fields, such as MASEN - Moroccan Agency for Solar Energy, IRESEN - Research Institute on Solar Energy and New Energy and ADEREE - Agency for Renewable Energy Development and Energy Efficiency. After introducing myself and our research field at Pr Iwamoto's Laboratory, they strongly expressed their interest in having collaborations and establishing MoUs with Nagoya Institute of Technology!

But first, let me introduce the position of Morocco in these renewable energy discussions...
Since its participation in the Rio Conference in 1992, Morocco has continued to demonstrate its commitment to contribute to the international effort in sustainable development and the fight against the effects of climate change. In fact, Morocco has always been active within the international community, in seeking solutions to the problem of climate change since its ratification of the Convention in December 1995. International recognition of Morocco's efforts has been granted by holding the COP7 in Marrakesh in 2001. This Conference under Moroccan presidency, was a great success in reaching the Marrakesh Accords, which paved the way for the entry into force of the Kyoto Protocol in February 2005.

Morocco's great potential in terms of renewable energy is a main driver to having recourse to solar, wind and hydroelectric power, to entail the country many benefits at economic, environmental and social levels as well as reducing the burden on national energy bill that contributes to more than 50% of GHG emissions, and reallocating the country's limited resources towards developmental and social projects. With this regard, Morocco has set an ambitious plan to develop renewable energy, with a 2020 target, of 2000 MW installed for each of solar, wind and hydro technologies, with the realization of the national Plan for the Fight against global warming (PNLCRC) and prospecting Climate Territorial plans. The national wind program aims at the development of wind farms with an installed capacity of 2 GW by 2020. This program alone will avoid 5.6 million tCO2 per year. The Moroccan Solar Program aims at the installation of 2 GW at five selected sites, with the first plant in Ouarzazate site operational in 2015. On energy efficiency side, Morocco has a target of 12% energy savings by 2020.

The implementation of Morocco's commitment has been further highlighted by the announcement of His Majesty King Mohamed VI, that Morocco extends his ambitions by increasing the share of renewable energy in the total energy consumption from 42% by 2020 (14% solar, 14% wind and 14% hydro), to 52% by 2030, on the very first day of COP21!

It is with high hopes and expectations that Morocco will hold the 22nd session of the Conference of the Parties (COP 22) to the UNFCCC, which is expected to take place in Marrakech from 7-18 November 2016. Speaking before the General Assembly, the Minister for the Environment, Hakima El Haite, stressed that "Lima is the COP negotiations, Paris is one of the decisions," adding that the COP22 scheduled in Morocco, will be "the Action Conference."