Solid oxide electrolytes have been extensively studied due to their wide range of applications in solid oxide fuel cells (SOFCs), oxygen membranes, catalysts, and gas sensors. Electrolytes with high oxide-ion conductivity at temperatures below 600 ᵒC are required to decrease the operation temperature of SOFCs. Professor Susumu Nakayama at National Institute of Technology, Niihama College has discovered in 1995 the extremely high oxide-ion conductivity in the intermediate temperature range below 600 ᵒC, which has encouraged many researchers to study the structural origin of this phenomenon.

It was believed that the high oxide-ion conductivity of apatite-type materials is due to interstitial oxygens. However, in this novel study, Professor Masatomo Yashima, Dr. Kotaro Fujii at Tokyo Institute of Technology (Tokyo Tech), and their colleagues have shown that apatite-type materials contain Si vacancies, but not oxygen interstitials. The Si vacancies in the materials have originally been proposed by Professor Koichiro Fukuda at Nagoya Institute of Technology.

Through single-crystal neutron diffraction studies using the SENJU diffractometer installed at MLF, J-PARC facility (Figure 1), they were able to accurately determine the crystal structures of the apatite materials La9.333Si6O26 and La-rich La9.565(Si5.826□0.174)O26 (□ denotes Si vacancy) including occupancy factors, atomic displacement parameters, and spatial distributions of oxygen atoms. They also measured the density and oxide-ion conductivity of the two materials. In this work, La9.565(Si5.826□0.174)O26 was selected because of its high oxide-ion conductivity.

Thus, the researchers proposed that excess La cations are responsible for overbonded channel oxygens along the c axis, which leads to highly anisotropic atomic displacement and high oxygen mobility. Hence this novel concept of "high oxide-ion conductivity by overbonding" may be useful for designing better ion conductors.

This research has also been introduced in EurekAlert!.

Figure 1 (a) A schematic figure and (b) a photograph of the SENJU diffractometer installed at the J-PARC facility. (c) Measured single-crystal neutron diffraction images. 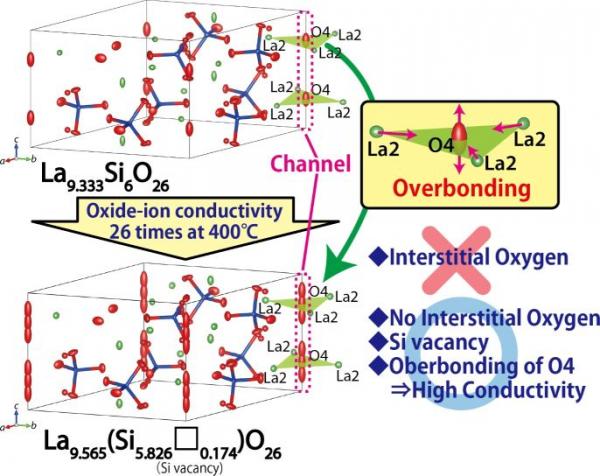 About Tokyo Institute of Technology

Tokyo Institute of Technology stands at the forefront of research and higher education as the leading university for science and technology in Japan. Tokyo Tech researchers excel in a variety of fields, such as material science, biology, computer science and physics. Founded in 1881, Tokyo Tech has grown to host 10,000 undergraduate and graduate students who become principled leaders of their fields and some of the most sought-after scientists and engineers at top companies. Embodying the Japanese philosophy of "monotsukuri," meaning technical ingenuity and innovation, the Tokyo Tech community strives to make significant contributions to society through high-impact research.
Website