Hydrogen has been hailed as the 'fuel of the future' owing to several reasons. First, compared to the conventionally used hydrocarbons, hydrogen exhibits higher energy yield. Second, the commercial use of hydrogen fuel, which yields only water as a byproduct product, would help mitigate the imminent global warming crisis by reducing the use of exhaustible and polluting fossil fuels. Thus, ongoing research has been focusing on efficient and environment-friendly ways to produce of hydrogen fuel.

Solar hydrogen production through photoelectrochemical (PEC) water-splitting reaction is an attractive "green" method of hydrogen fuel production, owing to its potential for high conversion efficiency, low operating temperatures, and cost-effectiveness. However, efficient separation of hydrogen gas from a mixture of gases (called "syngas") under different environmental conditions, has proven to be a challenge. A recent paper published in the journal Separation and Purification Technology seeks to address this challenge. In this study, a group of researchers from Nagoya Institute of Technology, Japan, led by Professor Yuji Iwamoto, in collaboration with researchers in France, successfully characterized a novel membrane that allows highly selective separation of hydrogen gas generated from the PEC reaction. Prof. Iwamoto says, "Membrane separation is attractive as a low-cost hydrogen gas purification technology. However, current techniques face several challenges, for example, water-induced swelling with polymer membranes and lower hydrogen permeance with metal, polymer, and supported liquid membranes."

With the development and characterization of this new PCS membrane, it is inevitable that its commercial adoption will not just facilitate the use of hydrogen fuel for energy needs but also curb the use of non-renewable fossil fuels. Prof. Iwamoto concludes, "With this technological development, we expect great progress in environmental-friendly and sustainable hydrogen production."

Let's hope that the use of PCS membrane is a step towards a hydrogen-based society! 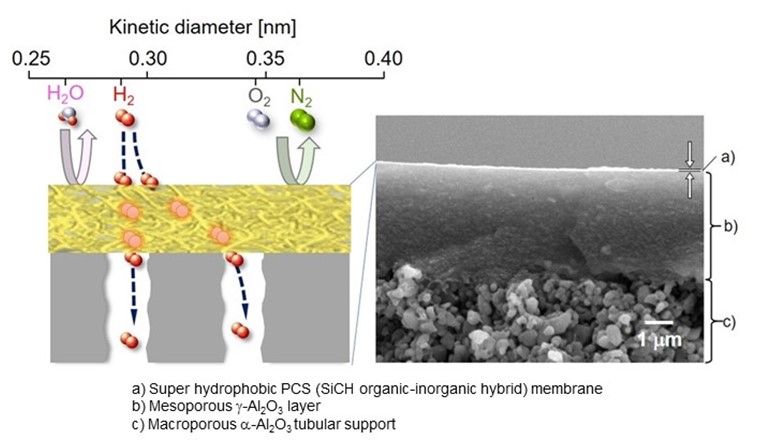 ※This study was made available online in November 2020 ahead of final publication in issue on March 1, 2021

Dr. Yuji Iwamoto is a Professor at Department of Life Science and Applied Chemistry, Nagoya Institute of Technology, Japan. Prof. Iwamoto's expertise lies in the field of inorganic material and their physical properties. He was the recipient of the prestigious Richard M. Fulrath Award in 2006. Some of his ongoing research projects are in gas separation membranes and functional ceramics. His academic affiliations include the Ceramic Society of Japan and Materials Research Society. He has published over 200 articles in reputed journals.