RESEARCH NEWS - The Bluest of Blue: A New Algae-Based Switch is Lighting Up Biological Research!

Several organisms possess "ion channels" (gateways that selectively allow charged particles called ions to enter the cells and are integral for cell function) called "channelrhodopsins," that can be switched on and off with the help of light. Different channelrhodopsins respond to different wavelengths in the light spectrum. These channels can be expressed in foreign organisms (animals even in human) by means of genetic engineering, which in turn finds applications in optogenetics, or the application of light to modulate cellular and gene functions. So far, the shortest wavelength that a channelrhodopsin responds to was blue.

However, recently, a group of scientists from the Nagoya Institute of Technology, Japan, and Jawaharlal Nehru University, India, have identified a channelrhodopsin that responds to an even shorter indigo blue wavelength of light. In their study published in Nature's Communications Biology, the group of researchers, led by Professor Hideki Kandori and Associate Professor Satoshi P. Tsunoda, identified a novel channelrhodopsin, which they named KnChR, from a species of terrestrial alga called Klebsormidium nitens. "We chose this alga, because it is known to be responsive to light, but its photoreceptor domain has not been established," reports Prof. Kandori. Unlike other discovered channelrhodopsins, KnChR was found to respond to indigo blue light (see Figure 1).

Figure 1: The working of KnChR
KnChR allows sodium ions and calcium ions to pass through in the presence of indigo light
Image courtesy: Hideki Kandori from Nagoya Institute of Technology

It is known that KnChR is made up of a seven-cell membrane spanning region, which forms the pore that allows the entry and exit of different ions. This region is followed by a protein moiety including a peptidoglycan binding domain. In order to investigate the properties of KnChR, the researchers performed extensive genetic and electrophysiological experiments.

Accordingly, the results of the experiments showed that changing the lengths of the cytoplasmic domain caused the changes in ion channel closure. Particularly, the shortening of the domain resulted in increased channel 'open time' by more than ten-fold. In addition, the researchers also identified two arginine amino acid residues, namely R287 and R291, in the same region, which played an important role in the properties of generated light currents. They found that KnChR exhibited maximal sensitivity at 430 nm and 460 nm, making it the 'bluest' channelrhodopsin (see Figure 2). 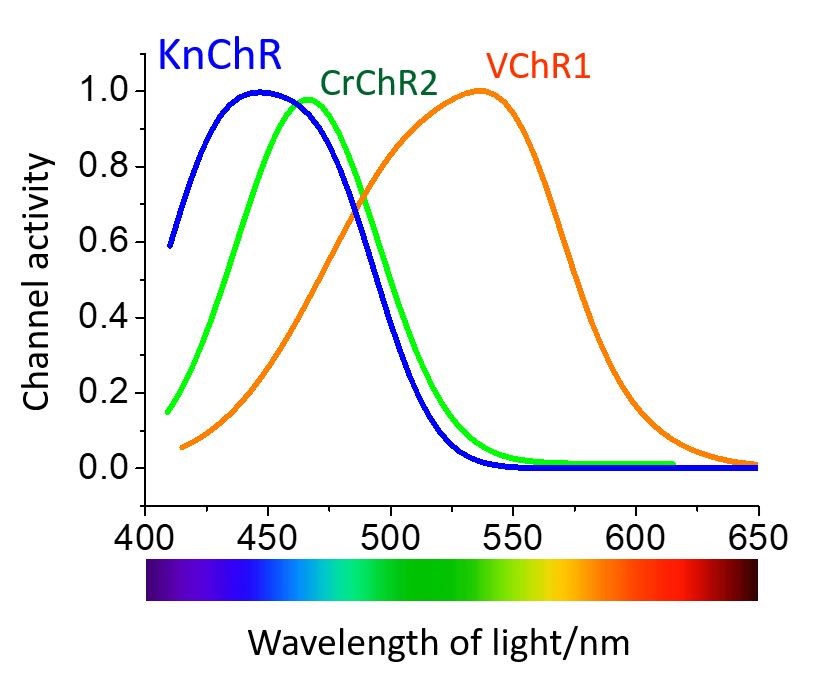 Overall, the researchers have faith in the KnChR being helpful in biological systems requiring specific excitation parameters. When asked about the implications of these findings, Prof. Tsunoda, who is the corresponding author of the study suggests, "KnChR would expand the optogenetics tool kit, especially for dual light applications when short-wavelength excitation is required." What this means is that the light-operated property of KnChR can be applied in targeted manipulation of an organism's biological functions, in a research setting. A few examples would include manipulation of neuronal and myocyte activities.

About Professor Hideki Kandori from Nagoya Institute of Technology, Japan

Dr. Hideki Kandori is a Professor at the Department of Life Science and Applied Chemistry, specifically the Opto-Biotechnology Research Center at Nagoya Institute of Technology, Japan. Broadly, his fields of expertise include biophysics, structural biochemistry, functional biochemistry, bio-related chemistry, biological physics, chemical physics, soft matter physics, and basic chemistry. Some of the major projects he has worked in include the development of infrared spectroscopy through the rhodopsin study, mechanism of light-signal conversion in photoreceptive proteins, and mechanism of light-signal conversion in photoreceptive proteins. He has over 314 publications as research articles, review papers and books, with reputed publishers, to his credit.

Dr. Satoshi P. Tsunoda is an Associate Professor at Nagoya Institute of Technology, Japan. He studied biochemistry and biophysics at Tokyo Institute of Technology. He first grew interested in research on rhodopsins when he was a post-doc researcher at Humboldt University in Berlin (Prof. Peter Hegemann's group). After returning to Japan, he was selected as a researcher for JST PRESTO program to carry out a study on enzyme-rhodopsins. He has a number of publications in the form of research articles, review papers and books, to his credit, and focuses on the research areas of biophysics, cell signaling, electrophysiology, protein biochemistry, and optogenetics.

This study was funded by the Japanese Ministry of Education, Culture, Sports, Science and Technology, specifically 25104009 and 15H02391 to Professor Hideko Kandori, and 18K06109 to Associate Professor Satoshi P. Tsunoda. In addition, the study was supported by JST CREST grant, JPMJCR1753 awarded to Professor Kandori, and JST PRESTO grant, JPMJPR1688 awarded to Associate Professor Tsunoda. Also, a part of the funding was provided by Department of Biotechnology, Government of India through an IYBA project-BT 101 O/IYBAJ20 16/02, involving Mr. Suneel Kateria.