A research paper on novel and facile synthesis of ultra-bright carbon nano-onions developed by Shirai Laboratory titled "Fabrication of ultra-bright carbon nano-onions via a one-step microwave pyrolysis of fish scale waste in seconds" was highly evaluated and selected as the Back Cover and Cover Profile of Green Chemistry, a scientific journal published by the Royal Society of Chemistry, UK. (Impact Factor: 10.182).

Carbon nano-onion with a unique multiple enclosed fullerene-like shell structure, as one of the most promising carbon nanoforms, has attracted worldwide attention in a wide range of fields, such as electrical devices, photovoltaic power generation, bio-imaging, and thermal conductive devices due to its high electrical conductivity, thermal conversion, and specific surface area, etc. In this paper, we report a novel and facile synthesis of ultra-bright and highly crystallized carbon nano-onions from collagen extracted from fish scales via microwave pyrolysis raised by the high microwave absorption of the macrodipole moment formed in the peptide functional groups in the collagen molecule along its triple-helical axis. During the microwave pyrolysis, the surface functionalization of hydroxyl and carboxyl groups on carbon nano-onions is simultaneously occurred, resulting in visible photoluminescence and high dispersibility in polar solvents. The obtained carbon nano-onions show a superior absolute quantum yield of 40 %, whose value is 10-fold higher than that of carbon nano-onions synthesized by conventional methods reported so far, and currently show the world's highest luminescence efficiency. Furthermore, the synthesized carbon nano-onions exhibit steady optical properties even when substituted with different polar solvents. We also succeeded in fabrication of emissive flexible film and LEDs via solution process by using water dispersion of carbon nano-onions mixed with polyvinyl alcohol polymer. It is expected that the synthesized carbon nano-onions will be applied to next-generation solid-state lighting and large-area light-emitting devices. 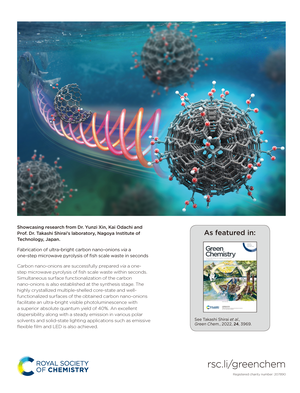 <Description of the article> Back Cover and Cover Profile