Home > Topics > RESEARCH NEWS - A Speedy Trial: What It Takes to Be the Fastest Land Predator

RESEARCH NEWS - A Speedy Trial: What It Takes to Be the Fastest Land Predator

What makes cheetah the fastest land mammal? Why aren't other animals, such as horses, as fast? While we haven't yet figured out why, we have some idea about howーcheetahs, as it turns out, make use of a "galloping" gait at their fastest speeds, involving two different types of "flight": one with the forelimbs and hind limbs beneath their body following a forelimb liftoff, called "gathered flight," while another with the forelimbs and hind limbs stretched out after a hind limb liftoff, called "extended flight" (see Figure 1). Of these, the extended flight is what enables cheetahs to accelerate to high speeds, and it depends on ground reaction forces satisfying specific conditions; in the case of horses, the extended flight is absent.

Additionally, cheetahs show appreciable spine movement during flight, alternating between flexing and stretching in gathered and extended modes, respectively, which contributes to its high-speed locomotion. However, little is understood about the dynamics governing these abilities.

"All animal running constitutes a flight phase and a stance phase, with different dynamics governing each phase," explains Dr. Tomoya Kamimura from Nagoya Institute of Technology, Japan, who specializes in intelligent mechanics and locomotion. During the flight phase, all feet are in the air and the center of mass (COM) of the whole body exhibits ballistic motion. Conversely, during the stance phase, the body receives ground reaction forces through the feet. "Due to such complex and hybrid dynamics, observations can only get us so far in unraveling the mechanisms underlying the running dynamics of animals," Dr. Kamimura says.

Consequently, researchers have turned to computer modeling to gain a better dynamic perspective of the animal gait and spine movement during running and have had remarkable success using fairly simple models. However, few studies so far have explored the types of flight and spine motion during galloping (as seen in a cheetah). Against this backdrop, Dr. Kamimura and his colleagues from Japan have now addressed this issue in a recent study published in Scientific Reports, using a simple model emulating vertical and spine movement.

The team, in their study, employed a two-dimensional model comprising two rigid bodies and two massless bars (representing the cheetah's legs), with the bodies connected by a joint to replicate the bending motion of the spine and a torsional spring. Additionally, they assumed an anterior-posterior symmetry, assigning identical dynamical roles to the fore and hind legs.

Additionally, the periodic solutions also revealed that horse galloping only involves gathered flight due to restricted spine motion, suggesting that the additional extended flight in cheetahs combined with spine bending allowed them to achieve such great speeds!

"While the mechanism underlying this difference in flight types between animal species still remains unclear, our findings extend the understanding of the dynamic mechanisms underlying high-speed locomotion in cheetahs. Furthermore, they can be applied to the mechanical and control design of legged robots in the future," speculates an optimistic Dr. Kamimura. 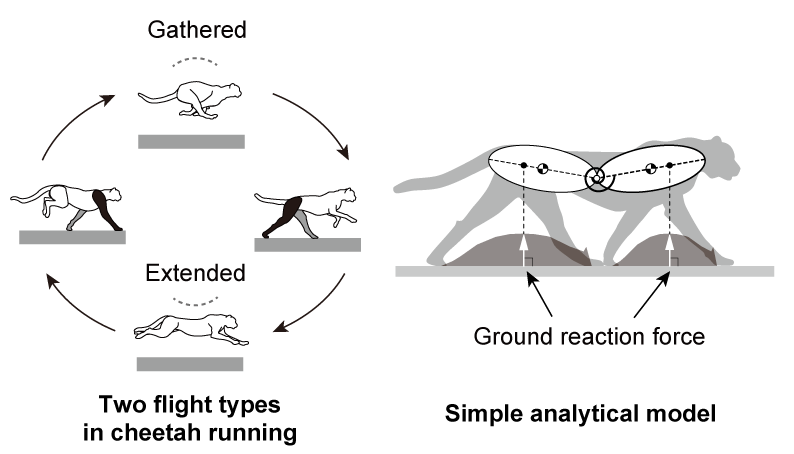 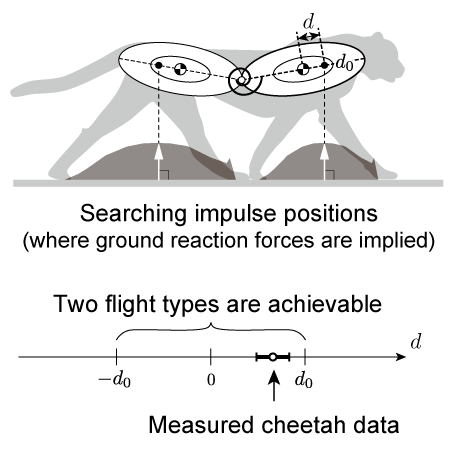 Figure 2. (Top) Impulse positions in a cheetah's body (Below) Criterion for flight types against measured cheetah data
Solutions obtained from the model yielded two determining criteria for flight type: the position and magnitude of impulse (ground reaction force) to the cheetah's body. Researchers identified the impulse positions for their model and compared them with measured data.
Image courtesy: Tomoya Kamimura from Nagoya Institute of Technology

Tomoya Kamimura is an Assistant Professor at the Department of Electrical and Mechanical Engineering at Nagoya Institute of Technology (NITech), Japan, and he has been working there since 2020. He specializes in intelligent mechanics/mechanical systems and his research interests include quadruped robot, simple model, and locomotion. As a young and vibrant researcher, he has 5 publications under his belt.