The electronic and optical devices that we use on a daily basis, such as mobile phones, LEDs and solar cells use transistors and other constituents that are consistently getting smaller and more compact. With an ever-growing need for computing power, storage, and energy efficiency, this trend will only continue to new extremes. Producing such small components for electronic devices requires the machining and preparation of structures on sub-micron scales, up to hundreds of times smaller than the width of a human hair. But current methods for the nanofabrication of surfaces use photolithography and e-beam lithographyー methods that are complicated, extremely expensive, generally inaccessible, and require high levels of expertise. Laser-induced periodic surface structure (LIPSS) has been earmarked as a novel and prospective alternative to these methods. In LIPSS, femtosecond lasers are used to deliver ultrashort laser pulses that spontaneously lead to the formation of periodic patterns on the surface that are much smaller than the laser wavelength.

A well-known parameter in LIPSS is the choice of laser wavelength, which directly affects the periodicity of the formed structures. However other parameters have remained unknown. The major concerns regarding the standardized use of LIPSS include the quality of the formed surface structure, namely the crystallinity of the substrate, potential for defects, and strain. To consistently produce LIPSS with controllable properties and characteristics for specific applications, it is critical to understand which laser sources should be used for which particular need.

To answer these questions in more depth, a Japanese research collaboration led by scientists from the Nagoya Institute of Technology, has now directly investigated the various parameters that are influenced by laser choice. The work, in collaboration with Osaka University, Tokai University, Kyoto University, and the Japan Atomic Energy Agency (JAEA), was led by Assistant Professor Reina Miyagawa of the Nagoya Institute of Technology, alongside Associate Professor Norimasa Ozaki of Osaka University, and Professor Masaki Hashida of Tokai University, who is also a researcher at Kyoto University. Their findings have been published in Scientific Reports.

"In our study, we chose silicon as a substrate, as it is a material used in many optoelectronic devices the world over, like transistors, mobile phones and solar cells," explains Dr. Miyagawa.

The researchers used two different femtosecond lasers on the substrate. In one experiment, a titanium and sapphire (Ti:Sapphire) laser system with pulses of 0.8 µm was used to structure the silicon at energies higher than the band-gap energy. In the other experiment, the researchers used a free-electron laser at mid-infrared pulses of 11.4 µm, which could probe the effect at energies lower than the sample band-gap energy. The analysis of the LIPSS samples was done both microscopically and macroscopically. The microscopic crystallinity and purity were studied using transmission electron microscopy (TEM), while a more macroscopic analysis of the strain and stability of the wider structure was investigated using synchrotron high-energy X-ray diffraction (XRD).

"When the Ti:Sapphire laser was used, the observed LIPSS retained the highly crystalline nature of the silicon but seemed to take on some residual strain. In contrast, the LIPSS which was formed by the mid-infrared free-electron laser led to some clearly visible defects. However, there was no observable strain to the system whatsoever," adds Dr. Miyagawa.

This study constitutes the first report on the high-resolution, microscopic and macroscopic observations of crystallinity in LIPSS using synchrotron high-energy x-ray diffraction. The findings indicate how LIPSS can be tuned and tailored for specific applications by manipulating its defects, strain, and periodicity, through an appropriate choice of laser. Continued research along these lines can further open the pathway towards the widespread application of LIPSS to achieve the cost-effective, simple, and accessible fabrication of nanostructured surfaces for applications in a wide range of optoelectronic devices. 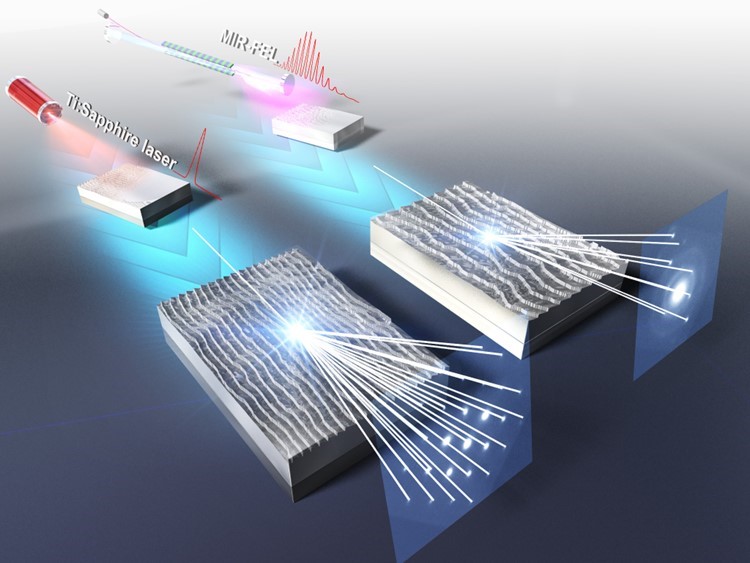 Kyoto University Free-Electron Laser (KU-FEL) is a mid-infrared (MIR) FEL facility whose tunable wavelength range is 3.4 to 26 μm. In this research, KU-FEL provided intense femtosecond laser pulses at the wavelength of 11.4 μm. The laser has a special pulse structure called the pulse train or burst pulse consisting of macro- and micro-pulses. In one second, 2 macro-pulses with a duration of 2 μs in Full Width at Half Maximum (FWHM) and interval of 500 ms are generated and used for making LIPSS on Si substrates. The macro-pulse contains more than 6000 micro-pulses with a pulse duration of shorter than 500 fs in FWHM and an interval of 350 ps (repetition rate of 2.856 GHz). The facility is open to domestic and international users for various types of application experiments under the collaborative research program under "the Joint Usage/Research center for Zero Emission Energy Research" of the Institute of Advanced Energy, Kyoto University. For more information, please visit the websites below.

Dr. Reina Miyagawa holds the position of Assistant Professor in the Department of Physical Science and Engineering at the Nagoya Institute of Technology. She obtained the title of Doctor of Engineering in March 2012 from Mie University. Thus far, Assistant Professor Miyagawa has 29 peer-reviewed research publications, and her research interests span the formation, control, and characterization of fine surfaces with femtosecond laser systems. For her research, she was awarded the competitive Grant-in-Aid for Scientific Research on Innovative Areas in July 2016, followed by a Grant-in-Aid for Scientific Research Young Scientists (B) in April 2017.